The village flooding in 2007 and 2008 was a major event in the history of our community. What happened,  but more importantly how we have tackled this, is what this section is about.

During the heavy rainfall of the first week in December the new ‘Moat? had its first ‘test run?, when hundreds of gallons of water per hour were diverted away from the village drainage system and preventing the flooding of Back Lane.

Twenty five trees have been planted at the side of the new dyke ,just to the right as the dyke crosses the road, and the length of the dyke grassed.

Many thanks to Dave Wolsey for the gift of the grass seed, the trees were our allocation of free trees from the council last year.

Many thanks also to Val and Roy Thornhill and Philip Moore for hours of hard labour and to Erica Leighton for her expertise. 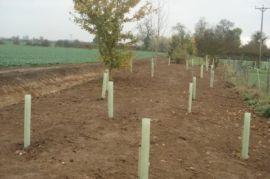 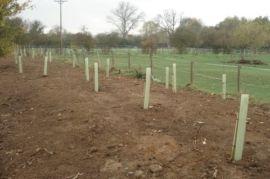 The proposed drainage work to relieve flooding in Back Lane commenced on Monday 15th of June. Completion is expected within the week.

The proposed flood relief dyke is now fully funded. A provisional start date of June has been provided by the contractor.

The funding for the Brattleby flood relief scheme has finally been granted!! Well done and many thanks for all your contributions. Come to the AGM on Wednesday April 1 for further information.

The following is just a brief history of the actions taken and the problems encountered in providing a flood relief scheme for the village.

Monday 25th June 2007 – Brattleby village flooded after a period of torrential rain. The drains were unable to cope with the excess water running of the land. ‘Wellspring House’ and ‘Stonewell House’ were both flooded.

August 2007 – Highways say they will start on clearing Back Lane drains in 2/3 months. Roy Thornhill and Bill Dixon investigate and draw up plans of where drains are in the village. No comprehensive plan existed before this one.

5th March 2008 – Volunteers clear stream to north of village to ensure adequate flow away from village.

July 2008 – Plans submitted to WLDC for proposed ditch. Planning department and The Environment Agency contacted with regard to required planning, verbally told there was no problem.

August 2008 – work on additional drains completed on B1398. Back Lane dug up to investigate blocked drains, confirmed that drains collapsed and blocked.

October 2008 – WLDC agree to fund half the cost of work. Final decision to be made by 31st October.

December 2008 – Now told that planning permission is required before the work my go ahead, also The Environment Agency need to give permission.

The village ‘Emergency Plan’ designed by WLDC for all communities, to enable early action in the event of an event similar to the flooding of 2007/8 is nearing completion. This will identify a ‘village chain of command,’ listing persons able to provide expertise and equipment. A copy will be available to all residents on request.

For those of us who were flooded during the unprecedented rainfall of June 07 it was without doubt a very stressful period. However, like all setbacks in life we have little alternative but to accept the situation as it is, rip up the foul smelling carpets and proceed to carry out the required reinstatement of work.

In my own case the one redeeming feature–if there are any under such circumstances–was the speedy action of my Insurance Company and their Loss Adjusters who carried out an initial survey within a couple of days. Considering the sheer volume of similar claims all over the country, this was impressive to say the least.

Throughout the whole process the Loss Adjusters personnel were helpful, courteous and above all returned phone calls, a practice which is quickly becoming a lost art!

Finely by the end of October the work was complete and it was with great jubilation the Spencer lounge was once again declared open for television viewers, following three months of ‘Deckchair’ viewing in the kitchen.

I felt obliged to send a letter of thanks and praise to the Insurance Company in handling my claim in a professional manner, with the minimum of fuss.

However, my feelings of admiration soon evaporated on receipt of my house and content renewal documents which stated, ‘As Brattleby is in a flood risk area your policy will be the subject of a £9000 flooding excess’.

Somewhat dismayed I replied saying, Brattleby was not a flood risk area, being four miles from the nearest river, explaining in detail the reasons the problem arose and the proposed solution which had been sanctioned by the UWIDB, providing them with a full report with documents and engineering drawings.

The reply I received stated, although they fully accepted the position, they would on completion of the work require a full report from a suitable qualified engineer, carried out at my own expense, upon which they may consider the removal of the excess.

Greatly annoyed by this and being reasonably confident Brattleby was not in a flood risk area I decided to write to the Environment agency seeking clarification.

The reply I received was quite categorical, the village of Brattleby is not a flood risk area. The only area subject to flooding is to the west of the village, in the area of Brattleby Hall fish pond, and the fish pond belt of trees.

As many villagers are aware this low lying area was once a mill-pond, and will by definition retain water, and the map provided by the agency clearly shows this.

As this issue could affect all residents with regards to disclosure during insurance applications, it is important the ABI are made aware Brattleby is not listed with the Environment Agency as being a flood risk area, where have the insurance company obtained information saying it is? And have they the authority to make such a far reaching statement?

I am sure you would agree there is little point in taking the matter further until all proposed alterations to drains and dykes are completed, after which time I fully intend to do so.

Foot note–I recently applied for contents cover on an apartment overlooking the Brayford Marina and was refused as this too is a flood risk area. The fact the apartment is on the 5th floor made no difference. God help the rest of ‘down hill’ Lincoln under 80ft of water.

I find it difficult to come to terms with the fact the longest day is already almost upon us. For many Brattleby residents last year was somewhat different having two ‘Longest Days’ in the same month! The chronological one of the 21st of June and June 25th, the day of ‘The Great Flood’, when several residents worked from 7am until midnight non-stop soaked to the skin.

As one villager aptly put it when I remarked how public spirited it was for so many people to turn out to help on such a dreadful day.

‘It’s because we’re all in the same boat’ came the unintentional reply.

Brattleby  residents will be pleased to know, Highways are to commence reinstatement and improvement work on the village drainage system on – or around– 7th July.

Unfortunately, this will require the closure of Back Lane for several days.

Due to the inordinate amount of time it is taking both Highways and UWIDB to carry out the required alterations and improvements to the village drainage system, it has been suggested a temporary ‘Emergency Flood Prevention Team’ is formed until these works are completed.

We are all aware how quickly the village can become inundated with water from the hillside. However, from past experience we know it is possible to prevent the worst of the flood waters by diversion of the flow at critical points.

The team would perhaps operate as follows:

• The village would be divided into sectors where it is known flooding will occur.

• During adverse conditions each volunteer would be assigned a ‘known’ critical point – where water is known to enter the village– at which, a predetermined method of preventative action would be taken.

• Other members may care to fill sand bags as required, as this operation is now the responsibility of the village, not West Lindsey District Council.

Although the 25/06/07 flooding of the village affected only a limited number of properties, it is to benefit of all to ensure this cannot happen again. Not only from the point of distress, there are future insurance implications to consider. Once an insurance claim has been made for flooding, this will show up on ALL future applications, as soon as the operator inputs the LN1 2SQ Post Code.

All insurance companies now share information, and will be aware of this.

However, once the proposed ‘Flood Prevention’ dyke and Highways work is completed, the Parish Council will ensure the ‘Insurance Industry’ are made fully aware of this, with the drawings, photographs, and approved plans from the UWIDB.

In the interim, it is essential we suffer no further flooding, which may result in further insurance claims.

It is no longer the policy of West Lindsey not to provide Sand Bags on demand during flooding situations. Each village has – on request- been provided with a one ton ‘Bulk Bag’ of sand, and a bundle of 500 sand bags.

The keyholders for the church are as follows:

• A Brooks The Garden House

On the 22nd of April a full survey for the above project was carried out by the Upper Witham Drainage Board. The initial findings suggest the proposed scheme is quote ‘Quite feasible’.

It is hoped the completed plans will be available shortly. This will enable the Parish Council to make a formal approach to the West Lindsey District Council for funding. The Anniversary of the ‘Great Flood’ is almost upon us, and it is the Parish Council’s intention to maintain pressure on the authorities concerned to fulfil their obligation in these matters.

On the 8th of April, a letter was dispatched to ‘Highways’ asking for a date of commencement of the ‘agreed work’ to the village surface water system. As yet, no reply has been received.